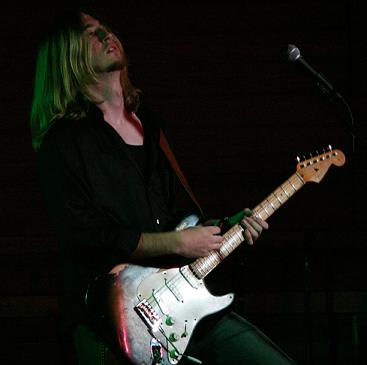 Twenty-one-year old Virginia-based blues guitarist Eli Cook is interviewed in the September 2007 issue of Guitar Player magazine. Cook plays both acoustic and electric blues. He manages to channel influences Alice In Chains and Son House, oftentimes within the same song, to create a unique, and modern, blend of the blues.

In 2005, Cook released a solo acoustic album titled Miss Blues’es Child that was recorded live and unedited in the studio. The CD features four original tunes and several classic blues compositions, including Terraplane Blues and Going Down South. Previously, in 2004, Cook released another acoustic blues album titled Moonshine Mojo, which featured covers of Little Wing, Mannish Boy, and Crosscut Saw, among others.

More recently, Cook has released an electric-based album titled ElectricHolyFireWater. He calls his brand of electric blues blues-metal, and for good reason. The music is rooted in the blues, but features modern, heavy riff arrangements. As the CD Baby page for the CD says: “Imagine Alice in Chains with Muddy Waters singing.”