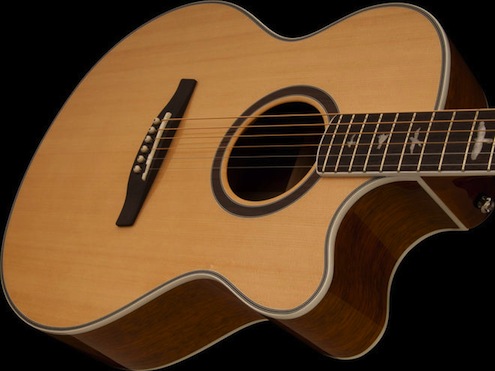 Some more PRS information from Music Radar: as promised last fall, PRS is adding a pickup option for their SE Angelus line of acoustic guitars:

Announced in September 2011, the PRS SE Angelus Standard and Custom models are made with high-quality components, including a solid back and solid spruce top, a bone nut and saddle, and PRS SE designed tuners.

A PRS pickup system will be an added option on the SE Angelus models in 2012, highlighting the instruments’ rich, resonant, and responsive tone. The PRS pickup system is an under-saddle design with three bands of EQ and an anti-feedback loop. The pickup uses one 9-volt battery for power.

The SE Angelus shares the same proprietary bracing pattern and several distinct construction features as PRS’s acclaimed Maryland-made acoustic line, as well as the company’s trademark bird inlays and headstock design. The PRS SE Angelus is offered in both a “Standard” and “Custom” package. The Angelus Standard includes mahogany sides, a solid mahogany back and a rosewood fretboard and bridge, while the Angelus Custom includes rosewood sides, a solid rosewood back, and an ebony fretboard bridge.

“The SE Angelus models are the newest additions to the SE product family, which has matured into a comprehensive line of electric and acoustic guitars as well as amplifiers. The addition of an optional pickup system on the SE acoustics makes the line even more complete. My hope is that all of our SE products become tools for making music and sources of joy,” said Paul Reed Smith.

The fully acoustic version of these highly-anticipated instruments will begin hitting stores in early 2012. Instruments with the optional pickup system are available for order beginning on January 19, 2012 and will begin shipping in the spring of that year.

A few comments have expressed frustration that the SE acoustics haven’t started shipping yet, so hopefully they’ll be happy to hear the news that they will be shipping “earlier 2012” with the pickup-equipped models will be shipping in the spring.